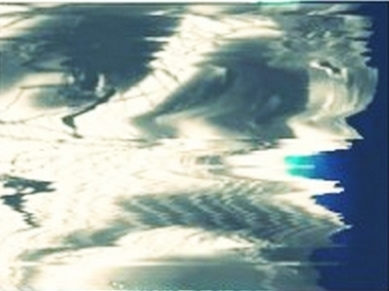 Kinema Ikon 7012 is an audio-video performance having as a concept the reinvention of video artworks from the ’70s and the creation of their sound; is like an upgrade brought to this artworks; is a modern interpretation and manipulation of unknown video artworks created by videomakers from that period. The passage from analogic to digital, the real time digital effects manipulating the original analogic video, the avant-garde sound accompanies perfectly the moving images resulting in a very beautiful glitch experiment, a futuristic av workpiece based on the past. A link between the ’70s and 2012 is created; is like looking back to the past, in order to create the future, today. The original footage I use is from the Kinema Ikon video archive that includes the works of romanian videoartists, 40 years ago. The experimental videos from the ’70s where shot in film and contain techniques like stop motion and light painting, techniques which only today became largely known. For the audio composition, I use new experimental electronic sounds leading through glitch, industrial, noize with a touch of breakcore, combined with techno. The artists that interest me and the videos I want to use are made by: Emanuel Tet, Ioan Plesh, Ioan T. Morar, Roxana Chereches, Viorel Simulov etc. The Kinema Ikon coordinators and organizers support me in the creation of this experimental av performance and they are very interested in seeing the final result of the old footage recreated in a modern manner, brought to date, with a new different life&value. Also, it’s very interesting to see the contrast that creates between old footage digitalized and new sound, analogic&digital, the product of a research work combined with new ideas, resulting in a new av work.

The visuals and sound were digitally created using only the software Resolume.

Performed once in 2012 at Live Performers Meeting, Rome (Italy).